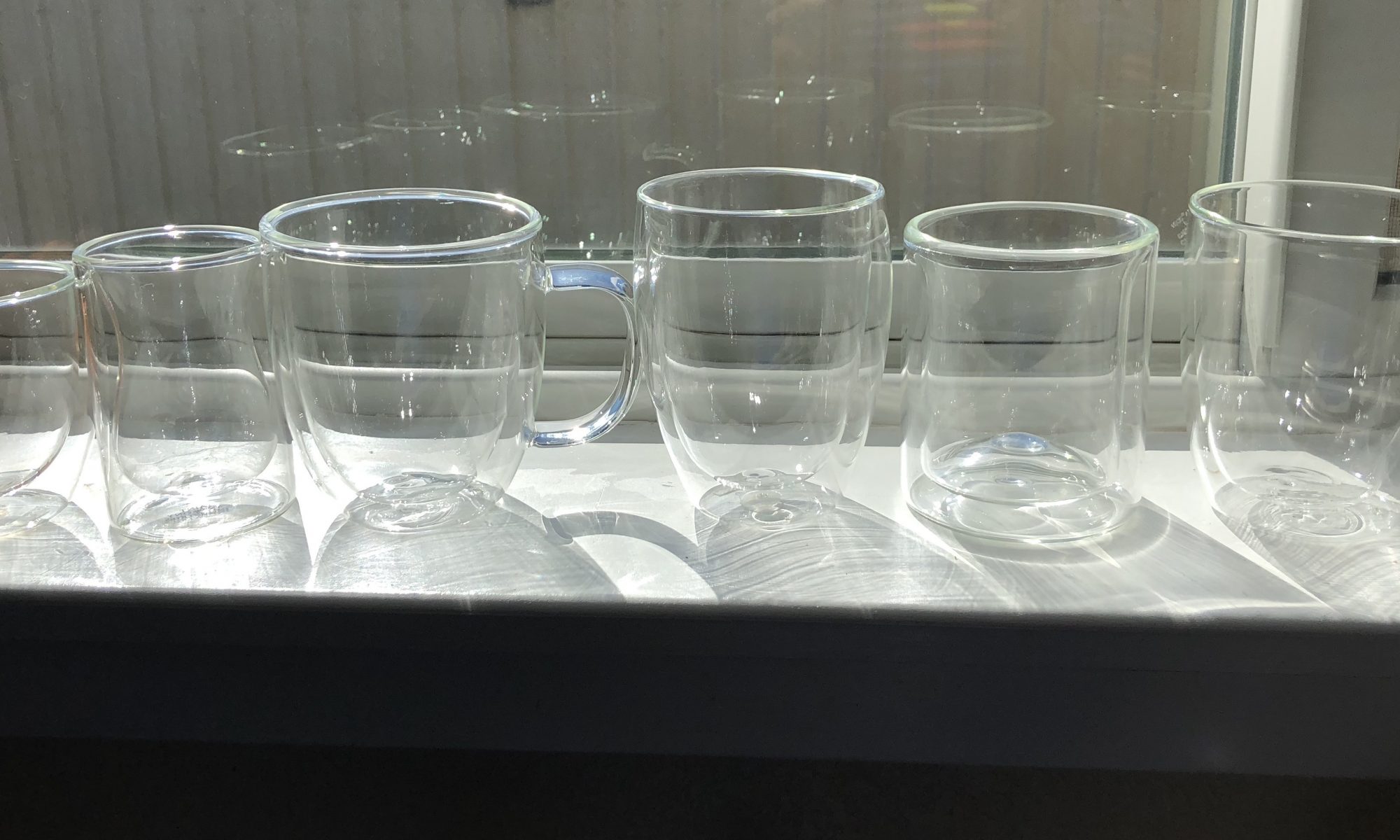 I am almost as excited about it as I am about YouTube, civic tech, board games, WordPress, and podcasts. (I’m a bit of an excitably interested person, it turns out).

Keep reading to hear my take on the best double walled coffee mugs after months of testing multiple options!

What is a Double Walled Coffee Mug?

For the uninitiated, double-walled glass mugs are clear-looking and glass. What you might not expect is that they’re significantly thicker than a simple glass mug. The big problem I have with both glass mugs, and normal ceramic ones, is that they get hot (when holding coffee). Sometimes (too often) uncomfortable to hold because the hot moves so seamlessly from the outside to the handle area.

Double glass walls (almost always with air in between) fixes that problem. Super well. Double wall glasses look great, feel great, and never sweat (when holding cold beverages) nor make your hand uncomfortably hot (while still keeping your coffee very hot, which is important to us).

There is a big thing to know about double-walled glasses: their thickness is both more and less. The actual glass layer compared to a conventional glass mug or pint glass, is actually much thinner. The overall wall is almost always thicker, but each of the two walls of glass is actually narrower. That does make them likely to be bit more fragile in a drop test or under a compressive force.

The Major Benefits of a Double Wall Glass Coffee Mug

I love double walled coffee mugs for a whole bunch of reasons I already started to say, but let’s get specific and bullet-pointed about their good qualities. Double-walled glass mugs have these benefits:

See? Double-walled mugs are great. But this wouldn’t be fair if I didn’t highlight some downsides.

Those good sides of double-walled coffee cups are real. But there are a few downsides to double wall glass coffee mugs, too:

That’s all I’ve got. If I missed something please tell me in the comments.

What Qualities to Look for in Double-Wall Glass Mugs

For me, I’m looking for these things:

Realistically, that’s it. And I’ve already told you that I find most double-walled mugs pretty handsome. So you shouldn’t expect my to tell you these are yucky.

To be clear: I’ve not owned every double-walled glass coffee mug in the world, nor have I even exhaustively browsed the internet to make sure I’ve laid my eyes on (photos of) all of them. These are simply the mugs that I own and like. I photographed them myself, for better or worse.

These are cutest little double glass coffee mugs. Their shape is novel. And they’re not actually big enough for the amount of coffee I like to drink in the morning (which is at least 12 fl oz, or 350mL). But they look so damn good that I’ve adapted a strategy of holding hot brewed coffee in a different container just so I can drink out of these.

These—being handle-less—also make a reasonable stand-in for stemless wine glasses. I’d not do it on a date or anything, but I do it a lot in my real life.

These (silly) reasons are why the Bodum 8oz Pavina Double-Walled Mug is my favorite for coffee.

Like the Bodum double wall glass mug above, these (which were a gift from Meggie after we’d been served them at cute little coffee shop in Salt Lake City) are way too small for me to put a full cup of coffee into them.

But I still use them. All the time. And what’s great: They’re also very good whiskey glasses. They have the same basic shape and size internally as the ubiquitous (among whiskey nerds) Glencairn glass.

This mug is the right size. And unlike the Hudson Essentials one I’ve given position #6, it’s got the right handle shape. This is purely a subjective and personal thing, but I enjoy the wider, broader outward sweep of the handle on these mugs to the Hudson one. It’s completely subjective, and a minor preference on my double-walled glass coffee mugs. But I can’t deny its presence.

This one is made by the same manufacturer as my #1. It’s even sold on the same Amazon page, and is part of the same line. But I find it much less appealing than the smaller 8oz one. The shape is quite different: much more narrow like a closed lily head than the smaller one. Some may like it (and I think it makes this an even better wine glass stand-in), but it’s not my favorite.

This is really just a rocks glass (the kind you’ll often have an “old fashioned” or other cocktails served in). It is included because of the other qualities of double-walled glass (thermal insulation, beauty, etc) that I sometimes reach a bit and put coffee in it.

It’s actually too small (like the Bodum 8oz and the St Anthony Industries in position 1 and 2), so I tend to reach for it less than others. But, it’s significantly thicker glass than the rest, which makes me trust it more (for things like pressing an AeroPress coffee down into it).

This mug is solid and still deserves a spot on our list of the best double walled coffee mugs. It’s a totally adequate double-walled glass coffee mug. If it was the only one I knew to exist in the world, I’d use it and still find it vastly superior to ceramic in 90% of circumstances. That said, nothing about it makes me excited. It’s solid, but it’s handle is a little too small and confined for my taste.

If you’ve come across a double-walled coffee mug you love and want me to see, please get in touch. I’ll admit to feeling a little more cash-strapped than I’d like right now, but even with that, if you send me an Amazon link for a double wall glass mug, you know I’m smashing that “Buy” button the instant the page presents one I like!

I hope, if you haven’t already, you try a double-walled coffee mug. They’re tons of fun and so, so pretty. You really must try them at least once in your life! 🙂

Is there another double wall glass mug that we missed? Add it in the comments!