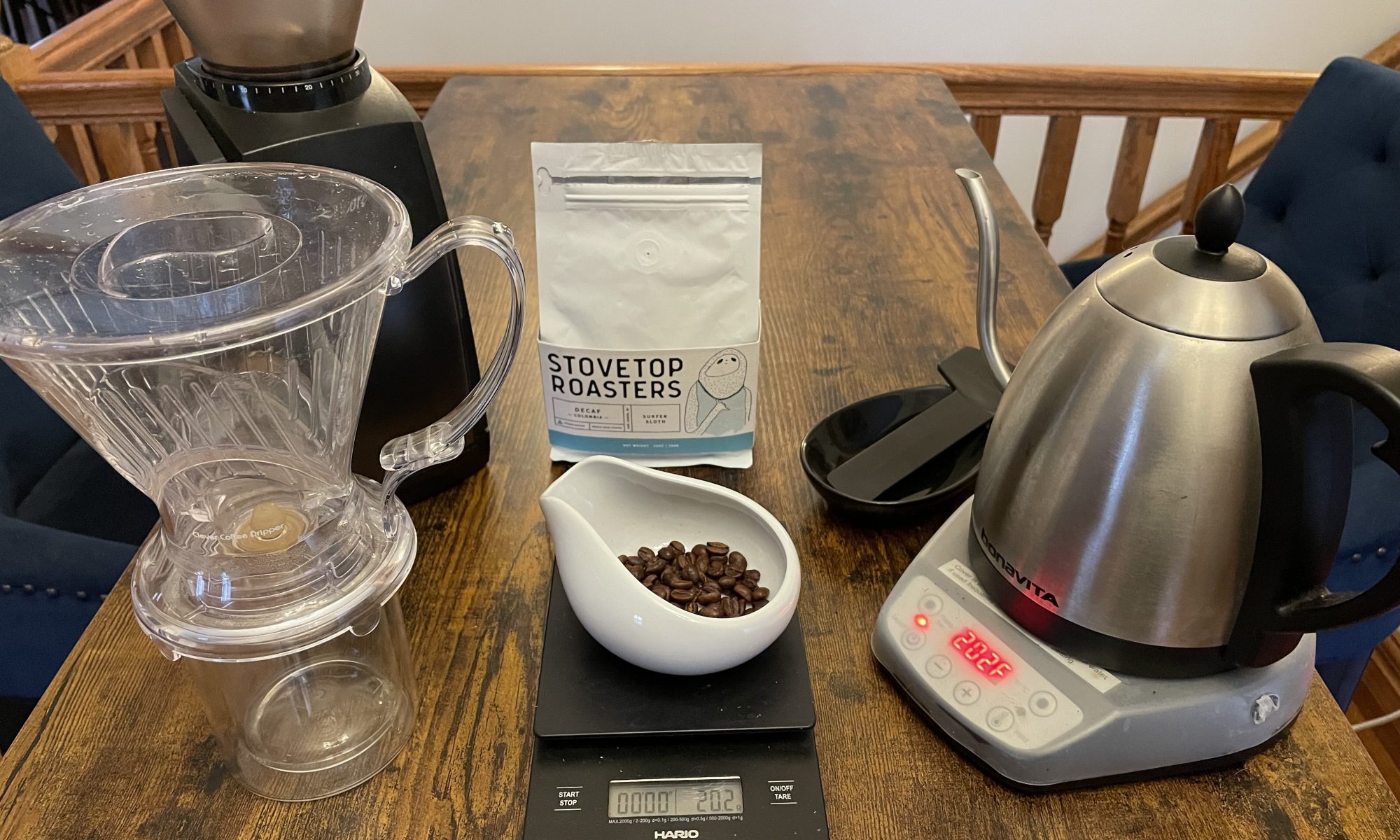 Over the summer, Megan and I took a little trip to the upper peninsula (“UP”) of Michigan. We spent a lot of time in Marquette, and we both really enjoyed Velodrome Coffee. They had a number of Clever Coffee Drippers for sale, and I told Megan about how I’d been thinking about trying one for years.

We went back and forth for a while about splurging on one (they were about $40 US), but I finally pulled the trigger after coming up with the clever/silly compromise that I write an article about it here on Low Key Coffee Snobs. So here it is: my Clever Dripper review.

What is the (Abid) Clever Coffee Dripper?

In short, the (previously Abid) Clever Coffee Dripper is great method to brew a cup of coffee. Like a classic “pour over” you put the brewer over your coffee cup (perhaps double-walled glass one, if you’re fancy 😉) and the coffee falls into your cup.

But in most other ways the Clever Dripper is actually quite different than a pour over. A key part of the pour-over is that it’s just got a hole in the bottom. The Clever Dripper has a much more intricate and interesting gasket system at the bottom.

In short, this means that the Clever Dripper is not a pour-over system, even though it looks so much like a Hario V60 or Kalita Wave. Instead, the Clever Coffee Dripper is an immersion brewer like the timeless French Press or the new-fangled AeroPress. By “immersion brewer” I mean that your water and ground coffee beans sit together in the container for a time. (In a pour-over, the water basically flows past the ground coffee.)

It’s really only once you’ve brewed your coffee that the Clever Dripper resembles a pour-over. You brew with the Clever Dripper on a flat surface. This has its gasket system in the “closed” position, and you leave it this way for 1-5 minutes (to your taste) after you’ve added the beans and then the water. Once placed on a compatible cup, the Clever Dripper lets the water flow, and the filtered, brewed coffee will drain into your waiting cup.

How I Brew with the Clever Dripper

I can’t think of much I dislike about the Clever Coffee Dripper. But there are some important caveats to be aware of if you’re thinking of getting a Clever Dripper.

The Clever Dripper is best for one cup at a time

One of the reason I’ve been using the Clever Coffee Dripper more lately is that Megan hasn’t really been feeling coffee lately. So while I brew her a nice black tea, I make myself a Clever Dripper. When brewing coffee for two with the Clever Dripper, both people get less coffee (maxing out at about 200mLs). And there’s a slightly weird need to stop the draw-down in the middle to switch cups. (Or to divide it post-drain, which is always awkward and spill-prone.) So I simply can’t recommend it in situations of brewing for more-than-one.

This one is a nit-pick, but we have a few mugs that the Clever Dripper doesn’t work well with. Compared with a AeroPress (which I hate to press onto my favorite double-walled glass mugs) there are a small number. Most the widest mugs we have are too wide for the Clever.

Overall though, these are small nitpicks. Which gets me to the strengths with which we’ll finish off our Clever Coffee Dripper review.

Strengths of the Clever Coffee Brewer

Overall, I think if you’re Clever-curious you should eventually try one. The Clever Coffee Dripper is pretty affordable at about $35, and just a reliable workhorse. My favorites parts:

While I really enjoy the ceremony of a pour over (and have missed it a bit now that I’m Clever-ing so much), there’s something to be said for how quick you can brew a cup this way. All the steps I outlined above (other than the brewing/waiting time) take maybe 2 minutes. So I can quickly get a great cup of coffee in just a few minutes, without much struggle.

A Nice Rich Cup of Coffee

I’m a low-key coffee snob, remember. I say that because I don’t have scientifically-backed opinions here. I’m a guy who cares about this stuff, but I don’t (currently) have my own TDS (total dissolved solid) refractometer or anything. But I feel like the Clever Dripper gives me consistent solid coffee, which often taste a little “richer” than what I pour-over. Partly this is probably my selective memory, but I also think this is a big benefit of the immersion brewing.

Comparisons to other coffee brewers

To conclude this Clever Dripper review, I’d give it a 8/10. Which is a little arbitrary to be sure. I think both the AeroPress and *a* pour-over system are more essential for someone getting into coffee. But no one who thinks the Clever might be a good fit is likely to be disappointed. It is a well-made brewer which delivers stellar low-effort coffee. What more could you ask for?